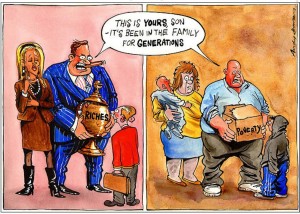 Unity. What does unity mean to the United States of America? The state of being united or joined as a whole is the meaning of “unity.”  Can we say that America is unified? Based on recent news, I would say no. A major part of being unified is by showing equality and fairness. In the above image, political cartoon artist, Andy Davey illustrates two families. One family is wealthy and holds a trophy that says “Riches,” while the other family is poor and holds a cardboard box that says “Poverty” written across the front. Both of the fathers say to their child, “This is yours son, it’s been in the family for generations.” Ironically, the United States’ government claims we are one cohesive country and looks to find solutions to help families get out of their economic and social distress; however, many people are in the same situation that they have been in for years. The social inequality that many Americans face every day shows that we are not all treated “fairly or equally”; it is just a false statement to say that we are a United States of America.

Davey’s cartoon doesn’t just portray what a wealthy family versus a poor family may look like, but also the idea of opportunity versus struggle. The attire of the wealthy family signifies that they haven’t experienced hardships. For example, the son who is wearing a business suit expresses his certainty that he will be able to find success early on in his life because of his family’s name and wealth. Whereas the family on the right with two children have experienced struggle and still probably won’t see the opportunities that they deserve like quality education or fair tax rates.

Based on this idea, I read an article called “Fair is Fair” by Stanley Fish, a law professor who sometimes blogs for the New York Times. He argues that fairness is more easily achievable in the United States than equality. “Fairness” means consistent with rules, logic or ethics, whereas “equality” means having the same quantity, measure or value as another. Fish describes formal equality and substantive equality. In formal equality, everyone receives what they have earned and nobody gets an unfair advantage because they were given a better opportunity than someone else. This closely relates with the meaning of fairness.  Fish also explains another type of equality called substantive equality, which in essence means having the “same possessions or income as another.”

I equate fairness versus equality with chocolate chip cookies. Imagine a scenario in which two children both have a sweet tooth. They both decide to go to Mrs. Fields to buy something. However, one child receives a fresh, warm chocolate chip cookie that just came off the cooling rack while the other child receives a burnt cookie that has been on display for the past hour. It is fair because they both paid the same amount and both received a chocolate chip cookie. It is only ethical that the employee charges each customer the same price. However, we know that the employee didn’t show equality amongst his customers because the cookie the second child received didn’t have the same value as the first child’s cookie, which makes this a situation of inequality.

One reason that the difference between fairness and equality can be seen is money.  It is easy to give education to everyone; however, it costs money to give the same value of education and “same quality of a cookie” to everyone. In addition, if it isn’t about money, then it may be perceived simply as favoritism towards the wealthy because they are judged as being better than the poor. Part of being a unified country is for the benefit of all citizens.

In addition, Fish also brings up the argument that Americans are fine with Mitt Romney having more money than them (citizens) but aren’t too happy about his tax rate being lower than his housecleaner’s. Many Americans believe that if the government is trying to make the economy fair for all, then why aren’t the tax rates the same regardless of the amount of income one receives? If you looked at the situation logically, if one social class was to have to pay more than another class you would think the wealthy would have to pay more because the lower class already suffers from an insufficient income and aren’t prospering, similar to the situation portrayed in the image above.

Fish claims that Americans feel it isn’t fair for everyone to have the same material things because then it would deter Americans who value self-motivation to “Stop shooting for the stars.” Everyone would receive exactly what one person worked hard for . I agree with this idea to an extent. It would be impossible for everyone to have the same “stuff,” but I think that the lower class should receive some of the same things as the upper class, like the same quality of education. By not giving the lower class a quality education like the wealthy, a domino effect occurs. It becomes less likely for them to see success further in their life, or want themselves to be successful.

For example, based on the cartoon above, the boy on the right probably receives an inferior education compared to the rich son on the left.  The students who attend these poor school districts that receive a lower education might also develop a lower attitude and willingness to achieve. They also might not have the right tools and resources that would make them want to become an entrepreneur, writer or maybe a doctor later in life because children that were raised in poor families almost never move forward, and each year they get a box shoved in their face that says “poverty,” instead of “progressing.”

Near Stanley Fish’s article in the textbook is a picture of a sign made by Occupy Wall Street demonstrators that says “Solutions not excuses.” This is what America’s mindset should be in order to be viewed as a unified country. For less than twenty days, our government was shut down because the two houses couldn’t come to an agreement. They must remember to ask themselves, “What is fair and equal for all citizens?” and “What will benefit the greatest number of people?” Fairness should not be more emphasized than equality, but rather they should be balanced with one another. We are no better than the person standing next to us, and idealistically fairness and equality is what will make America a better country for generations. Everyone deserves to have the same education, tax rates, and opportunities if earned, especially those who struggle daily. If children are the future, then every child needs to have the same quality opportunities, resources and support necessary to achieve. This does not mean that everyone should have the same materials and income because then everyone would be rich or everyone would be poor. But one would hope that one day everyone could be proud to say that they are an American and are happy to be a part of this beautiful country we call the United States of America.