Editor’s Note: The following essay refers to an advertisement that can be viewed here. A smaller version has also been included in the text.

Americans have a special relationship with guns. Gun ownership is protected by the Second Amendment of the United States Constitution, but some people believe the rights of citizens to own guns has led to a culture of homicides, suicides, armed robberies, and terrorist attacks; because of this, gun control has become a highly divisive issue. The 2013 advertisement by Moms Demand Action for Gun Sense in uses specific colors, gender roles, and the rhetorical appeals of nomos, kairos, and pathos to remind the audience of recent school shootings. 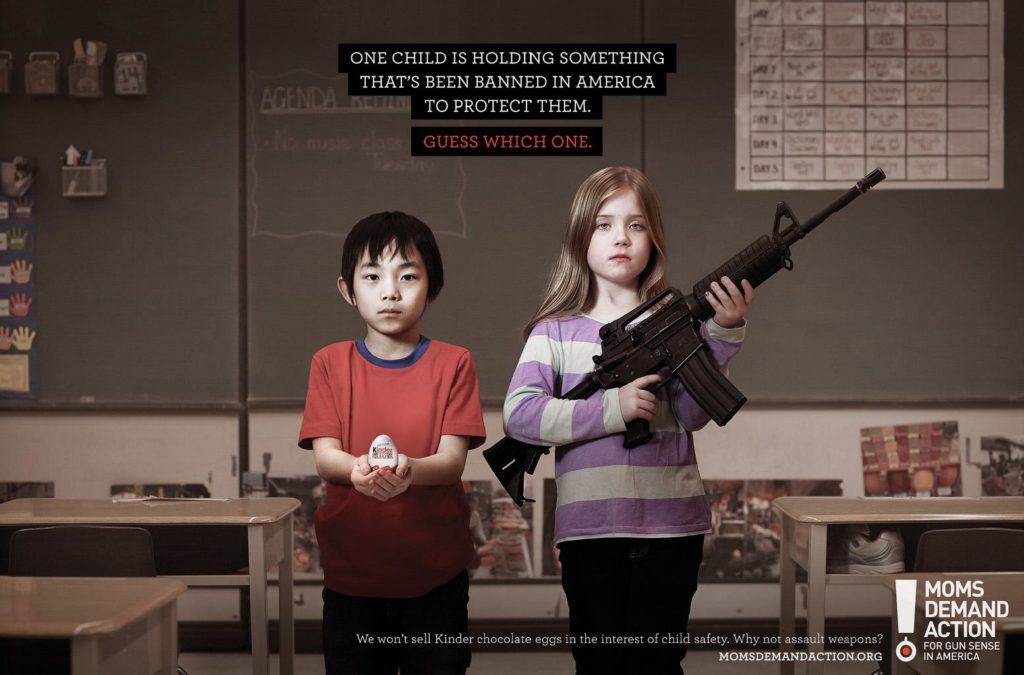 The advertisement shows a weekly agenda pinned on a clean green chalkboard along with containers that hold markers and other school supplies. Below the chalkboard are various posters and collages that decorate the room. The setting is quite blurry and is not shown in full detail, indicating that this is the background. The subjects of the advertisement are two children standing side by side, shown only from the waist up. On the left stands a young boy who seems to be of Asian descent. He wears a plain red crew neck t-shirt with a blue collar and black pants. His short, black hair is slightly disheveled, and he appears to be about elementary school age. His dark eyes penetrate the viewer with a blank stare. His lips form a thin straight line, and his cheeks appear to be drawn downwards, revealing miniature pouches of baby fat. His hands are tightly cupped around a small white egg with the logo of the chocolate brand, Kinder. Beside him is a young girl a little taller than him. She seems to be the same age as the boy, or slightly older than him. She wears a wrinkled lavender and off-white striped long sleeve shirt and black pants that look a half-size too big. Her straight, blonde hair flows over her shoulders, glimmering faintly due to the dim light of the classroom. Her light-colored eyes could be blue or hazel, but because of the lack of bright lighting they look almost gray and lifeless. Her dull eyes stare directly at the viewer, her face showing no sign of emotion. Her short, chubby fingers are wrapped around an assault rifle. Her left hand, which has one painted nail on the pinky finger, rests on the handguard. Her right hand, index finger comfortably placed on the trigger, clutches the pistol grip. The butt of the rifle is tucked securely under her right arm, while the weapon is pointed towards the upper right corner of the image. The tip of the weapon extends past the top of her head, making it seem bigger and taller than her. On the top of the advertisement are capitalized white words that read: “One child is holding something that’s been banned in America to protect them.” Directly beneath are capitalized red words that read: “Guess which one.” In smaller white words on the bottom right, the advertisement says, “We won’t sell Kinder eggs in the interest of child safety. Why not assault weapons?” In the bottom right corner is the logo for the organization Moms Demand Action for Gun Sense in America.

The emotions associated with the colors of the children’s shirts along with the color contrast between the children’s shirts and the items they are holding impact the effectiveness of the advertisement. In Picture This: How Pictures Work, American illustrator Molly Bang states that the color red is aggressive and exciting while the color purple is mild and calming (32). In the advertisement, the boy holding the Kinder egg wears a red shirt while the girl holding the assault rifle wears a purple and white shirt. The aggressiveness of the boy’s red shirt conflicts with the gentleness of the Kinder egg he is holding. The feelings of tranquility and security associated with the girl’s purple shirt clashes with the feeling of danger from the assault rifle she is holding; it’s as though the boy holding the egg should have worn purple, and the girl holding the gun should have worn red to stress that chocolate is safe, and guns are not. If the advertisement switched the colors of the children’s shirts, it could have emphasized the ridiculousness behind the laws that make guns more accessible than chocolate. However, if the girl holding the gun was to wear red and the boy holding the egg was to wear purple, the advertisement would look exaggerated because the audience might think that it is trying too hard to make the gun seem dangerous. The colors of the children’s clothes in the advertisement contrast with the items they are holding, while the contrast between light and dark colors captures the viewer’s attention and allows the audience to focus on the specific elements of the image (Bang 80). By having the bright red of the boy’s shirt contrast with the white egg, as well as having the pale purple of the girl’s shirt contrast with the black gun, the viewer is able to notice the gun and the egg very clearly. This makes it easier for the audience to see the main focus of the image which helps the advertisement make its argument.

The advertisement relies heavily on nomos as it expects the audience to identify the items the children are holding, and to recognize how harmful each one is. Although the advertisement includes the words “Kinder chocolate egg” and “assault weapons” to help the viewer identify each item, the words are written in small lettering, and the viewer might not be able to read them right away or from a distance. The advertisement relies on the image of an assault rifle and a Kinder chocolate egg, rather than the explicit labels of each object, and expects the audience to recognize these items. As stated by John Kell in the article “Kinder Egg is Coming to America”, it may be more difficult for an American to recognize the brand Kinder because Kinder is an Italian chocolate brand and the Kinder Surprise chocolate egg, one of Kinder’s most popular products, was banned in America. If the viewer does not recognize the brand on the egg, the viewer may still think that a small white oval resembles an egg, which is generally seen as harmless. The viewer may feel slightly confused, not fully understanding what the danger of the assault rifle is being compared to. Therefore, they might not be persuaded by the advertisement. The advertisement appears to be more effective when the viewer knows that Kinder eggs are hollow and contain a toy inside that “may pose a public health risk as the consumer may unknowingly choke on the object” as reported in the import alert “Detention Without Physical Examination of Confectionery Products Containing Non-Nutritive Components” from the United States Food and Drug Administration. Prior knowledge of this information would help the audience believe the advertisement.

The advertisement is also using nomos by expecting the audience to recognize that the children in the advertisement are in a classroom setting. The audience is expected to associate the items in the background such as the chalkboard, posters, and desks with a traditional classroom. The small paper cutouts of hands in the background may indicate that the classroom is for young children, maybe in kindergarten or elementary school.

Since Americans have to be at least eighteen years old to vote, the target audience for the advertisement is adults. The advertisement tries to tug at the heartstrings of adults by having the subjects be two young children who could potentially be in danger. Children are a sensitive population because they are innocent and “haven’t done anything to earn the hate or enmity of the world” (Singer). The advertisement is trying to connect with the audience through the common belief that children’s lives are valuable because children are the future. The advertisement tries to evoke feelings of sadness and pity by implying that the lack of gun control can lead to the death of many more children. Simultaneously, it tries to bring about a sense of responsibility for these children by suggesting that the audience should be held accountable for their safety and wellbeing. The image of a child holding something as deadly and dangerous as an assault weapon is supposed to come off as wrong and absurd. The advertisement is trying to make the audience uncomfortable with the current gun laws in place. It implies that we as a society have failed in protecting our children, making the audience feel guilty and persuading them to vote for more gun control.

The advertisement argues for an increase in gun control in America by saying that assault rifles are easier to acquire than Kinder chocolate eggs even though chocolate is supposed to be less dangerous than assault weapons. The advertisement’s use of color, contrast, nomos, kairos, and pathos help convince the audience that America lacks proper gun regulations and to vote for more gun control. The use of rhetoric in this advertisement shows that images have the ability to make a convincing argument. We are surrounded by these images that attempt to persuade us. It is important to deconstruct and analyze the arguments behind images so that we can determine whether or not we should allow ourselves to be persuaded by them.