A bikini model in a commercial for a car, a bikini model in an ad for watches, and bikini models on news posters. Today, sex and advertising go hand in hand. With today’s influence of media, advertisers are trying to reach their audience everywhere, from posters at bus-stops, to internet and TV commercials. Sex is often an important factor in catching the attention of consumers, and as a result, advertisers are using sex more aggressively than decades ago. Although sex is a popular factor in selling sporting goods, advertisers should focus more on the athletes and their skills instead of using sex to get people’s attention.

Roxy is one of the many brands that uses sex to sell their products. It’s one of the world’s most well-known surf brands for women; they sell everything from women’s surf and swim clothing to sports equipment. Before, Roxy tried to present itself as a youthful women surfer brand that admired the women’s surf culture. Now, because of their success, they have a huge impact on the women’s surf culture. Recent ads from Roxy show that they are changing their marketing strategy to focus more on women’s bodies in order to catch more attention.

It’s well-known that sex in ads generally increases the sale of products. As a result, we see sex used more often and more aggressively than before, especially in sports ads and sports commercials. This is problematic because it affects us more than it used to; we think that what we see is how we’re supposed to look. We believe that we have to look like models in order to fit in. This has caused self-doubt, especially among teenagers. The teenage years are some of the hardest in life, and if teens start comparing themselves to models in commercials they can get disappointed.

Sex in ads also affects what we teens look for in a partner; instead of focusing on personal values when searching for a partner, teens tend to look more for what they see in ads and commercials. Personally, I think that it’s okay to use sex to catch attention as long as it does not steal the focus from the products. Sports brands, in particular, should remember that sex is not what they are promoting. But currently, sport ads tend to focus more on women’s bodies than their athletic skills.

Roxy’s strategy is to use women’s bodies to catch the audience’s attention, and they do this more than they used to. The brand is changing from being the fun, youth surfer brand to being more adult and sensual. Instead of focusing on the actual product, recent Roxy ads reflect their new focus.

The two following ads are recent ads from Roxy: 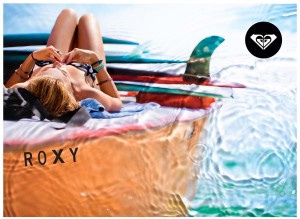 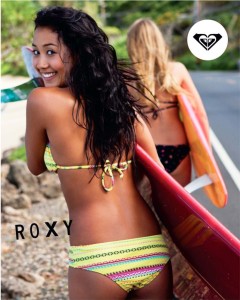 The two print ads are promoting Roxy’s swimwear collection, and both ads have a similar style. The first ad shows a bikini model laying close to the water. She is posing as she is sunbathing and she has her surfboard right next to her. The model is positioned to the left of the picture and she is the clearest object in the entire ad, which gives her the most focus. At the bottom part of the ad we see the name “Roxy” and they have placed their logo at the upper right corner. The second ad has the same style by putting a bikini model to the left of the picture and making her the clearest object. There are two models in this ad but the focus is on the model to the left. She is looking back to the camera and smiling with a surfboard in her hands. The name “Roxy” and the logo are placed similar to the first ad.

The ads have a lot in common, but the main connection is sexuality and flirtatiousness. They both use models in bikinis to catch people’s attention, and even though you can see a surfboard in the ads, these are less about surfing and more about what a female surfer should look like. Both models are supposed to appear feminine and sexy. You can’t see the clothing Roxy promotes in the first ad; the focus is on the model, and the implication is that anyone can be as hot if she wears Roxy. The model to the left in the second ad is placed so that you can see her body, and she is looking back as if she knows that people are looking after her. The second ad shows some of the clothing, but again, the main focus is not the clothing but the models.

Roxy uses models like these to catch people’s attention, and that’s a well-known trick in the advertising business. Researcher Tom Reichert, professor and head of the department of advertising and public relations in the UGA Grady College of Journalism and Mass Communication, said in a recent study “Sex sells because it attracts attention. People are hard-wired to notice sexually relevant information so ads with sexual content get noticed.” Roxy’s marketing department knows this and they are trying to figure out how far they can go on focusing on sex in order raise profits.

In one of Roxy’s most recent commercials (June 2013), Roxy was promoting a surf event in Australia. The beginning of the commercial shows an unidentified female surfer in her bed waking up and showering, all when she is half-naked. Some parts of the commercial are in slow-motion. After her shower, we see her going to the beach and slowly paddling out in the water. We don’t see her face, only her body and especially her butt is in focus. Roxy took the use of sex to another level in this commercial. What they are promoting is a surf event, but we don’t see any surfing at all. The commercial is all about sex and using a woman as an object to catch attention. The slow motion makes it more emotional and smooth, and the zoom-in makes the audience focus on her body and the way she acts.

Roxy made this commercial to catch people’s attention and they succeeded; but, since they released these ads, Roxy has received criticism from females, especially from female athletes. Cori Shumacher, a three-time world champion surfer gives her criticism in an article in the LA Times saying “Roxy’s recent ad … reinforces the inequalities women face in surfing and other sports.” Besides her comment in the LA Times, she started a collection of signatures from people who are upset with the commercial. According to Schumacher, Roxy’s newer ads and commercials are all about sex and not about sports. She wants Roxy and brands in general to focus more on the athletics and the skills needed to master the sports instead of focusing on sex. Schumacher’s message to Roxy as a well-known brand is that they should make ads that would prove women’s abilities and that women can be as competitive in sports as men are. Schumacher is not alone with her opinion; Mariah Burton Nelson says in an article about females and sports “‘the media is still selling heterosexism and ‘feminine’ beauty. And if you listen carefully, in almost every interview’ female athletes still express apologetic behavior through feminine dress, behavior, and values” (572). This means that the problem is not in the sports themselves, but in the way the media portrays the female athletes. Today’s influence of media makes us believe that what we see is how things are in society. In other words, the media creates false expectations, instead of showing the real scene.

As seen in the ads and the commercial presented in this essay, sex is becoming a more important factor in advertising. It’s not only Roxy but brands in general that use sex as a more common factor to increase sales. Research shows that sex will have an even bigger role in future advertising even though more women are offended by this trend. A solution would be if some of the biggest brands, like Roxy, tried to go against the over-influence of sex in advertising in order to change the public view. Unfortunately, since using women’s bodies in commercials catches attention, advertisers will keep sex as a common factor. The important thing is to find the balance of what’s okay and what isn’t. The main focus should be on the products and not sex; the advertisers should focus more on promoting the female athletes instead of using them as objects.