Women want to feel beautiful in their own skin, but it seems hard to do that with the pressure that the media gives them. Nowadays, the media tells a woman how to be a woman; they have created their ideal image of what a woman should be. To the media, beauty is: tiny waist, perfect hair, flawless skin, and big breasts. Women see ads like those from Victoria’s Secret that have tall, skinny models, and they think that’s perfection. Women think they must look that way to be considered “beautiful.” The media has forgotten about reality. They have forgotten that most women in America are not tall and skinny. What society needs is more campaigns like Dove’s, that empowers real women’s beauty. Although ads that show beautiful women are popular, they make women feel imperfect and insecure. Instead, the media should create ads that empower the beauty of real women.
Victoria’s Secret ads are very sexy. Most women wish they could be those models, but know they never will. Their products are for women, so they can achieve that beautiful image that the media has created. In the ad that I came across, we have Heidi Klum in a white bra. Her hair and makeup are done perfectly. In bold, we have the title saying: “New Perfect One,” and after that it says: “No One’s perfect. Until Now.”

This ad catches our eyes very quickly. Not just because of the model in a bra, but because of the title. In other words it’s saying that with that bra we can be perfect. We could be that sexy image a man would want, have a perfect body. If we want to be perfect like that model we need this bra. In “The Silk Strategy of Victoria’s Secrets,” authors Chelsea Chi Chang, Alice Lin, and Charlene Mak state: “As long as they don Victoria’s Secret lingerie, women can be transformed like Cinderella from the ties of domestic life to one of the angels seen on the walkway.”(3) In other words, women are nothing without the products from Victoria’s Secret. Victoria’s Secret advertisers want female consumers to feel this way so women will buy their products. They believe that sexy and beauty is defined by the models they have on their runways. They don’t empower real women; instead, they make their confidence go down because they’re not perfect.

Unlike Victoria’s Secret, we have ads like those by Dove that show what beauty really is. In one Dove commercial, we have a young woman that is coming in for a photo shoot. They first show her naturally. They show her real skin and hair. Then they show her getting her hair and makeup done. As this is going on, you can see how they start putting this girl together and create that ideal image of what beauty is. They take pictures of her and then we see the pictures getting edited. They transform her completely. They adjust her neck to make it longer, make her eyes bigger, add more volume to her hair, make her lips bigger, fix her ears, fix her nose, and adjust the lighting of it. Then it switches to a scene in a street where two young ladies are walking, and we see the final image of the woman on a billboard. At the end of this it says: “No wonder our perception of beauty is distorted. Take part in the Dove real beauty workshop for girls.”

We see how the media creates that “ideal” image. Even the media knows that “perfection” doesn’t exist. That’s why ads that we see are all Photoshopped. No one is perfect; that’s what Dove wants us to realize. In “The Beauty Myth: How Images of Beauty are Used Against Women,” by Naomi Wolf, she talks about how since the old times, we have been focused on beauty. She states: “For the first time new technologies could reproduce-in fashion plates, daguerreotypes, tintypes, and rotogravures-images of how women should look”(15). Wolf tells us that the media has been portraying that ideal image for ages, even since print ads were first made. Even with the antique technologies that they used back then, women were given an image. They would take pictures of women that other women would want to be, and women men would want. The perfect human being does not exist, so it shouldn’t be necessary to create something that will never exist. In ads like Victoria’s Secret’s “I Love My Body” campaign, they try to say that you should only love your body if it’s perfect. We need to start showing the truth of what beauty is just like how the Dove ad did. We need to empower the beauty of real women.
Real women don’t look like the women we see on ads. Both Dove and Victoria’s Secret did an “I Love My Body” campaign, but in the Victoria’s Secret ad, we see models in cute lingerie and their hair and makeup done perfectly, looking very cute and flirty, but serious, whereas in the Dove ad, we have real women of all shapes and sizes dressed in a simple white bra and underwear. They are happy and their poses just seem more natural. 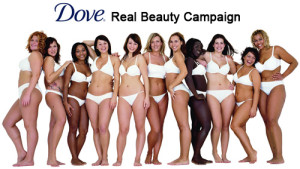 Victoria’s Secret still reinforces that “perfect” image; Dove doesn’t. They show REAL women. The bodies in the Dove ad vary and that’s good because it shows that beauty comes in all shapes and sizes. They boost that confidence for women. Dove is saying: “Hey, love your body, you’re beautiful regardless.” Not many women will be able to relate to Victoria’s Secret’s campaign because they don’t look like the models. All the models in the Victoria’s Secret campaign have the same body shape.
In the article “Who Will Be Beautiful in the Future?” Jenny Matthews talks about “beauty from within, about your radiance being the embodiment of your life and your spirit and your character – don’t over-adorn, and don’t mask”(para 18). What Matthews is trying to say is that, beauty doesn’t necessarily mean what we see on the outside. Most times the personality of someone is what makes them beautiful. Some of us try to hide it by trying to be “perfect” on the outside. Beauty doesn’t necessarily mean to be perfect. The imperfections of real women are what make them beautiful. In the Dove ad, these women are smiling and confident about the way they look, despite their “flaws.” They show more personality and life than the models from Victoria’s Secret.
It sounds cliché to say that it’s not all about the looks on the outside, but it’s true. With the models in the ads of Dove we can see their personality shine through; that makes them even more beautiful. There is no exact definition of beauty. You know the saying “beauty is in the eye of the beholder?” It’s true. Women don’t need to kill themselves in order to be considered “beautiful” according to the media. Dove wants women to understand that we are unique and beautiful in our own ways. That is a message the media needs to start spreading more.
The media has lacked in portraying the beauty of real women. The advertisers make women feel insecure about the way they look in order for them to make a profit. Because of this, a lot of women, even young ladies, will do anything to achieve that look, and that can be dangerous. In “Beauty and Thinness Messages in Children’s Media: A Content Analysis”, by Sylvia Herbozo, Stacey Tantleff-Dunn, Jessica Gokee-Larose, and J. Kevin Thompson, it states: “Reasearch suggests that sociocultural factors, such as media exposure, significantly influence body dissatisfaction and the development of eating disorder symptomatology in our society…”(21). If the media keeps creating beauty stereotypes, it will decrease the way ladies feel about themselves. We need to start creating more positive images and show women they are beautiful no matter what before it turns into something very dangerous.