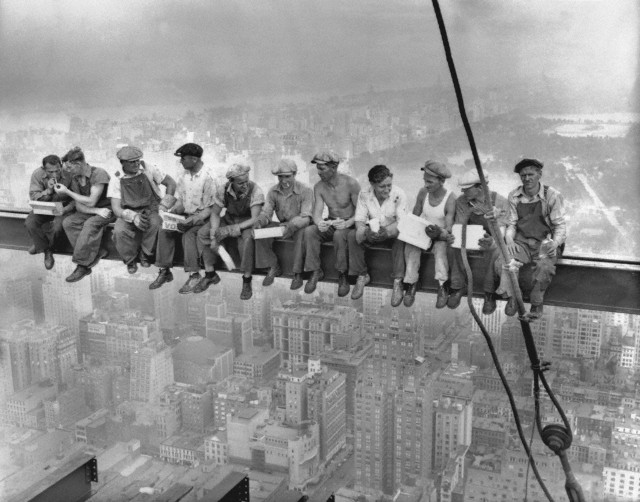 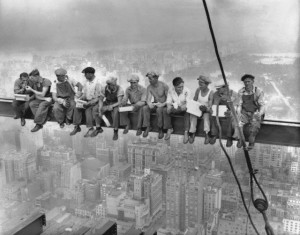 29 Sep 1932 — Construction workers eat their lunches atop a steel beam 800 feet above ground, at the building site of the RCA Building in Rockefeller Center. — Image by © Bettmann/CORBIS

In the 1930s,  during the Great Depression, many union workers would do anything to put food on their plates. During this time, skyscrapers were under construction, and union workers would work unharnessed on a steel beam above the city. A photograph of these men was taken on September 20th, 1932 and is enough to make the viewer anxious. They are miles high above the Earth’s surface, doing what their career demands them to do. These men only have each other amongst the clouds to get the job done. They work together, rely on each other, and seem fearless regardless of the intense pressure of being at an extreme altitude. It appears that through teamwork and a positive attitude, one can accomplish goals in the riskiest circumstances.

The expressions on their faces show a relaxed state as the draft of cool wind sways the beam underneath them. These men live life on the edge and show no fear, although they are one step away from death. Eleven men rely on one another to keep from losing themselves and letting fear consume them. While in these dark times full of poverty, these men did what they could to provide for their families. They kept a positive outlook and are laughing during the lunch break.

In the photo, it appears that the sound of civilization eludes them; only the sound of a slight wind gust can be heard whistling against the steel surface beneath them. These brothers in the sky show no fear when talking and having lunch while sitting on a steel beam. They all realize that one false move or one slip may be the end of their lives. Their adrenaline is probably pumping constantly, but they hardly notice it since they chatter happily during their lunch hour together. They eat their lunch, have a drink, read the newspaper, catch up on their daily conversation, and have a smoke. In the photograph, everything looks gray but from their 360 degree point of view they see absolute beauty from the blue sky to the blue waters below while observing the city that never sleeps. After the break, it would seem that it is time to return to the construction work and continue the job and work until the next lunch break.

Others interviewed had similar thoughts on the photo; however there were contrasting views. Vidette, a student at USC, at first thought that it was a fun and exciting picture, when watching them smile having a good time eating and drinking while on their lunch break. She then began to realize the dangers those men had to face. She believed in the possibility that this picture may not be real due to the fact that it appears to be staged.
Tim, another person interviewed, seemed to have more background knowledge on what the union workers were working on and was able to depict what was happening in the photo. He felt that it was strange how they had no safety belts back then and that they could easily fall to their deaths. He says they appear to have fun; however, it may be a fake picture and could be created with a green screen. He was very willing to take this job as long as he was paid well. The meaning behind this photo to Tim would be to work hard,  play hard, and to enjoy your work because it may be the last day on the job.

The comments by Vidette and Tim support my argument that the men are having a good time despite the potential danger. Their opinions were focused on the safety issues, where I am focused on the fact that the men are working together and playing together at risk, while maintaining a great attitude for a common objective. The economic times were difficult and motivated men take on whatever jobs were available. An article written by Sara Malm provides historical evidence that “During the economic depression men were willing to take on any work regardless of safety issues” (Malm). The building where “Lunch atop a Skyscraper” was taken is the centerpiece of the Rockefeller Center complex. Archivists say “the shot showing 11 construction workers enjoying their break on a suspended beam, high above the streets of Manhattan, was in fact a publicity stunt.” Although the models were real workers, the moment was staged by the Rockefeller Center to promote their new skyscraper 80 years ago today. This information affects some of the perceptions of the actions in the photo because it is staged. The mannerisms and gestures look authentic but they seem particularly relaxed at such a high altitude. The altitude also seems unbelievable. They are incredibly high up in the air on a beam that is isolated.

The photo also evokes fear in the viewer because of the risk factors involved. According to Molly Bang’s, “Picture This,” the geometric signs, shapes, and colors perpetuates mood and feeling. The idea that certain shapes and sizes may actually have a reaction for the viewer is a strange concept. In the photograph, the outline of the shapes of the men represents jagged edges. Bang claims that pointy shapes are scary to look at and corresponds with Vidette and Tim’s opinions that they were scary and nervous about the men in the photograph.
The “Lunch atop a skyscraper” is a classic photo that was staged during the economic depression in order to promote the Rockefeller Center. It symbolized that a working man would take any type of job regardless of the risks involved. Bang’s article describes shapes and colors that have an emotional effect on the viewers. My interviewees’ described a feeling of anxiety and fear for the union workers that coincides with the jagged shapes bang represented. As Malm revealed, the photo is a publicity stunt staged to promote the Rockefeller center during the depression to lift spirits. Although economic times were tough, the union workers managed to keep a positive state of mind and show jubilant behavior. This conflicting information creates a unique image bringing mixed emotions to the viewer. Although this image is disturbing in some ways, it appears to be an overall positive image of teamwork and camaraderie where it they believe their goals will be achieved.

Malm, Sara. “The Picture That Proves Why Iconic Photograph of Workers Eating Their Lunch on Rockefeller Beam Was All a Publicity Stunt.” Mail Online. Associated Newspapers, 21 Sept. 2012. Web. 29 Oct. 2014.