My literacy journey with comics and reading began when I was living in my country, Kuwait. At that time, my family had a get-together in my grandfather’s house on a daily basis to help build a strong relationship between the family members, especially the kids. When I was 4 years old, I used to spend most of my time with my cousin because we were the same age. The time we spent playing together bonded our relationship, and what bonded our relationship even more was our first comic. Both of my cousin and I were problematic kids, who went on our own adventures and broke everything on our way. The only solution our parents did to stop us from breaking things was to buy a book, make us sit in one place, and read it without making any noise or problems. This is what started my literacy, and my comics journey.

It’s commonly known that a 4-year-old kid brain is in the developing process and it’s very hard for the brain to analyze and understand words; however, it was a different case for my cousin and I. For us, we took the challenge when we received our first comic from our parents. It was an Arabic version of the Disney comic Donald Duck that told the story of his three nephews Louie, Dewey, and Huey, or as my cousin and I called them, Green, Blue, and Red, due to their hats’ colors. 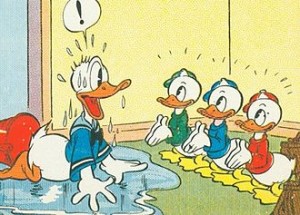 At first when we opened the book, the colorful pictures amazed and astonished us. We flipped the pages fast because we wanted to see more of these beautiful, colorful pictures. We wanted to understand what the three small ducks inside the book were talking about, so we asked our parents to read it for us, but they refused and told us to read it by ourselves. My cousin and I were determined to read the book and we started to read with the help of our family members. The book did not disappoint with its visuals and its marvelous story. It focused on the adventures the three small ducks had, and kept its humorous, witty dialogues on point with the story’s progression. After we finished reading, we wanted to read more stories about the three small ducks, and their weird uncle, Donald Duck. Initially, our parents just wanted to keep us quiet because of the ruckus we were making in my grandfather house.  They didn’t expect us to get captivated and interested in the comic. Our parents thought comics might teach us how to read; for me, actually reading did even more than teaching in my childhood.

In my first year of study in elementary school, I went through a painful hardship that stopped my learning process and took me to the hospital. I was diagnosed with a rare disease called, Henoch-Schonlein Purpura (HSP). It is a disease that targets the skin, the joints, and the kidneys in children. Unfortunately, I was one of the few patients around the world who faced complications and needed hospitalization. It was a compilation of painful incidents upon each other. I was engulfed in my pain and was obligated to wake up to the white walls, the white bed sheets, the white nurse uniform, and the white fear. It was like living on a white sheet of paper, so blank that it represented my state of mind and depressed soul. What colored my blankness was my mother’s constant support to my ailing body and soul. Moreover, What filled my emptiness was my childhood friend who I missed so much: comic books. My mother bought new ones rather than bringing the old ones to change my mood and make it brighter. With the help from my mother and my family members, I was able to learn, even in illness. It was hard to return to school again, but still, I managed to keep up with my classmates in most subjects because I didn’t stop reading even in my hard times.

Subsequently, while growing up, I began reading other books. I would get a lot of information by reading these books, so I stopped reading comic books and focused on space, physics, and history books. But in spite of receiving a lot of information from the science books, the feeling was very far from pleasure and enjoyment. Instead, it backfired and made me feel sad and depressed until I met the brother of the comic, Manga.

In middle school I started watching Japanese animation. There was a specific animation that was known between boys in the middle school. The name of the anime was Slam Dunk.  After watching an episode about the hero’s background story, I talked to my friend about it. Due to my surprise, he shocked me with saying that it was not the real story,  and I could find the real story in the book, called Manga.  I sought out the book and couldn’t buy it, but my friend gave me the book to read.  I wanted to know more about the hero of the Manga. Then it finally came to me. I felt the joy of reading, the joy of wanting to know more. It was the same feeling that I had when I read the Disney comics. Although Manga is a book that didn’t contain as much information as the other types of books, I learned from Manga more than what I learned from the science books, since the enjoyment made me focus more when I read Manga. I believe if someone does not enjoy reading a specific genre then it is better to stop. Just like me, it will not benefit him if the book is not appealing to him. I came to the conclusion that even if someone read the most informational book in the world, they will not learn anything from it if they don’t like it. If a person doesn’t enjoy a book, then it is a waste of time reading it.

My journey with comics is a long road that does not have an ending. Through the hardships that I had in my life, reading comics had a positive effect on both of my personality and intelligence. It made me stand in the place I am now, a university student. I started with comics at a young age but in the end I ended up enjoying books that are the same in an old age. Comic books took me out from my depression, and I feel attached to them more than a person you would call a friend. It is indeed an irreplaceable friend. With comic books, my smile returns, and I continue to read.